BrowserProtect.exe: What you need to know, how to remove it 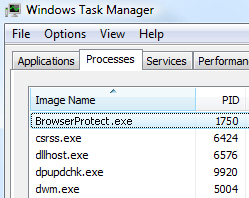 Browserprotect.exe is a part of the Application Manager by PerformerSoft LLC. It was originally developed by Bit89 Inc. First thing to note is that browserprotect.exe is not a technically a virus or malware, it's a potentially unwanted program (PUP). Avast, for example, detects this application as PUP.bProtector. Other antivirus programs detect it as a Trojan. It's a thin line actually but I would say it's a Trojan because it doesn't work as a backdoor and it doesn't steal passwords, etc. Once installed, this application changes default search engine and home pages in all major web browsers. BrowserProtect.exe*32 (Windows 8) protects those settings from changes. In other words, it may be difficult to change your home page or search engine provider, even it's Google or Bing. Some users notice that after they picked up this application their computers became sluggish. It may be associated with adware as well. Sometimes when uninstalling this application users get the following notification: 'browserprotect.exe has stopped working'. You may cause other problems too. All in all, it will do more harm than good, so I suggest you to remove browserprotect.exe from your computer.