What is minerd.exe and how to remove it? 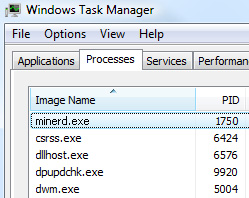 minerd.exe is a part of multi-threaded CPU miner for Bitcoin crypto-currency system. Very often this application causes CPU usage to go to 90% or even more. Needles to say it's not essential for Windows and may cause problems. If you knowingly installed this Bitcoin miner on your computer then there's nothing to worry about. Even if you antivirus says it's a trojan horse it's probably a false positive. However, cyber crooks and fraudsters are using this software to earn some extra money as well by monetizing botnets. They drop the main mining modules on infected computers and start mining. They usually set low mining speed, so that the minerd.exe process only uses unused CPU cycles. But others don't. Infected users quickly notice that their computers became very slow. This is a sign that your computer is infected and not only with RiskTool.Win32.BitCoinMiner or PUP.BitCoinMiner but also with Trojan downloaders and spyware. I recommend you to remove minerd.exe from your computer.