Disk Antivirus Professional is a rogue application that passes itself as real and top-notch antivirus software. Most computer users are aware of the importance of real security software. A good one, which can prevent hackers from stealing important information and protecting against viruses and malicious software. This one, however, won't make your computer safer and it's far far away from what you could call a decent security product. It mainly targets computer users in the United States and UK. However, over the past 6 years or so, rogueware attacks have been reported in many countries around the word and this particular malware isn't different - it may be and probably is promoted in other countries as well. 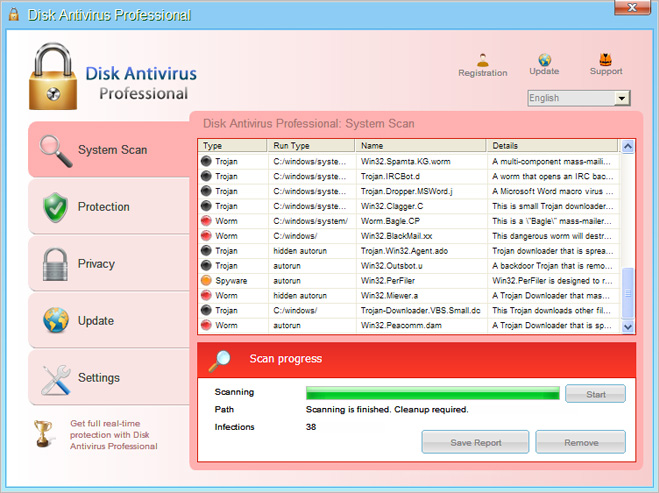 Due to the necessity of security software for every user, cyber crooks have attempted to utilize that for their own benefit. By offering consumers fake security software that is faulty or carrying malware, cyber crooks are able to make money. This lucrative scam commonly targets less computer savvy users who willingly spend hundreds of dollars for programs that report non-existent infections and literally do nothing to protect your computer.

In addition to charging money, the software can also infect computers with more sophisticated malware, for instance, rootkits and Trojans. A Google study in 2010 suggested that rogue security software is responsible for 15 percent of the total malware detected that year. The good news is, the numbers are going down third year in a row but rogue security applications are still overwhelming genuine malware scanners.

Once installed, the rogue application will pretend to scan your computer for malware. Obviously, it will detect at least 20 or 30 Trojans and other malware on your computer, even if you know for sure that the system was perfectly clean before this darn thing showed up. On the other hand, it might fail to detect real viruses in case your PC gets infected. So, one way or another, Disk Antivirus Professional is nothing more but a scam. You may already know, that sometimes upon downloading rogue security software, it Trojan droppers install viruses or other forms of malicious software on your PC so that the rogue security program will have something to detect. This isn't the case, though.

When running, Disk Antivirus Professional will display fake security alerts and pop-ups to further scare you into thinking that your computer is infected. Remember, its goal is to trick you into paying for rogue software. There are at lease 5 or 6 nicely designed but totally fake security alerts that may indeed trick less computer savvy users. 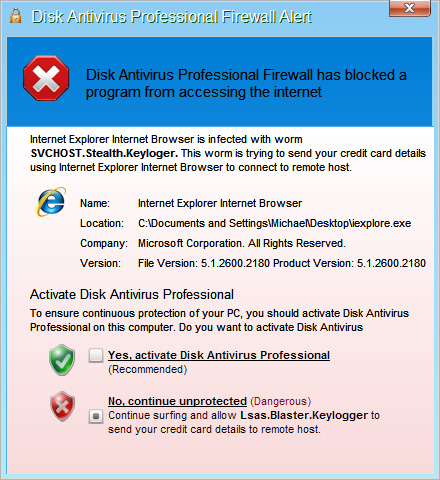 But there's one thing that puts a huge smile on my face - for some strange reasons it blocks everything except Internet Explorer. Seriously, scammers probably think that IE so insignificant that it's not even worth blocking it. Of course, I'm just kidding. The rogue application doesn't work that way, but still it's kinda funny to see such mistakes.

Make sure that your computer software is always up to date. Other rogue security software might not present itself as a fake security warning, but instead try to exploit vulnerabilities in common software. Adobe Flash, Adobe Reader, and Java are usual targets in these scenarios. A web-based tool developed by the Information Security Office allows people to check their browser version, ensuring that they are kept up to date.

Be mindful of phishing scams. There are times when a phishing email or site may be utilized to lure you into installing rogue security software.

Be alert with unexpected prompts of software download during website visits. A majority of software providers such as Adobe, Microsoft, Mozilla, and Symantec among others include the functional update within their products. If you feel in doubt, close the unexpected prompt. Check for updates via software built-in functionality.

Always buy original software. Security software is an important program, so make sure that you are buying from a legitimate source or even better, official site. Please note that this is an investment. Verify that you are purchasing the product from their authentic website. In addition, contact the customer service in case you have any questions.

Last but not the least, avoid phishing scams that encourage people to click on links from unauthorized senders in emails. Do not attempt to download from popups that tell you to download a certain program, no matter how scary and convincing they look. From now on, be more aware about possible malware that can hit your computer. Remember, prevention is always better than cure!

Ok, so you know the basic principles how to protect your computer from possible rogueware attacks. If you are reading this article, your computer might be already infected. But don't worry, bellow you will find a step-by-step guide on how to remove Disk Antivirus Professional from your computer. Three possible methods that hopefully will help you remove this malware for good.

Do you have any additional information or questions on the Disk Antivirus Professional virus removal? Post your comment or question below. Good luck and be safe online! 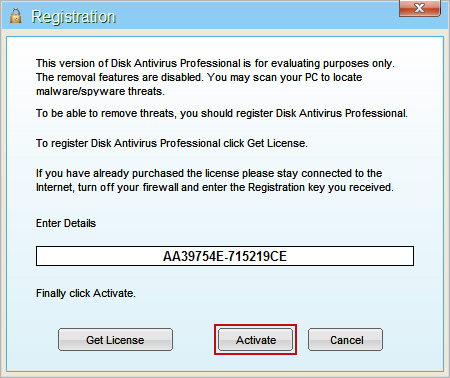 Once this is done, you are free to install recommended anti-malware software and remove Disk Antivirus Professional from your computer properly.

1. First of all, go to your Desktop and right click the Disk Antivirus Professional.lnk shortcut file and select Properties. 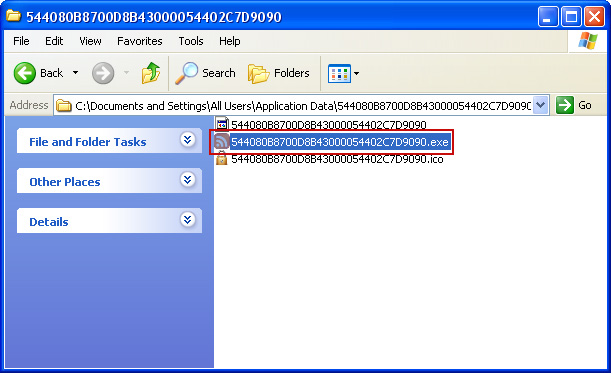