This page contains step-by-step instructions on how to remove System Care Antivirus from your computer. System Care Antivirus is both an annoying issue and one that can have a far-reaching knock on effect – even going so far as to leave you financially out of pocket. It's yet another rogue security application from the Rogue.WinWebSec scareware family, currently being distributed through infected websites and spam.

How does it find its way onto your PC in the first place, how do you know if you've been affected – and most importantly; how do you prevent it from happening?

Rogue antivirus software, including this one, is normally extremely professional looking and to the untrained eye it is virtually impossible to distinguish between a legitimate version and a fake one. Unless you are familiar with scareware families or did some sort of investigation or research yourself. The criminals behind this fake AV are clever – in fact the industry is worth over a billion dollars per year! At least it was so profitable a fee years a ago. They design a graphical user interface (or GUI for short) that looks just like a genuine antivirus application and once this rogue version is running on your PC, the GUI is launched which in turn displays a bogus scanning procedure on your screen. However it is completely false and no scan will be occurring. 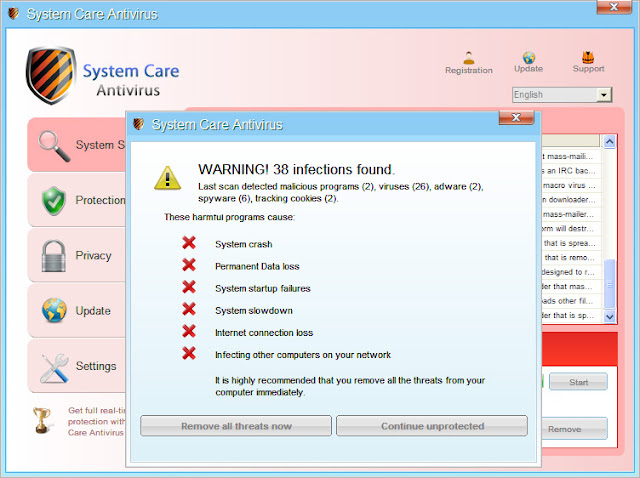 Once the fake scan has been ‘completed’, System Care Antivirus will then tell you that your PC is infected and that you have unwittingly installed malicious software or fallen victim to a virus. Usually it lists at least twenty supposedly detected infections on your computer ranging from low severity to extremely dangerous. What happens next is that the fake antivirus software will normally offer you two choices: one to clean your computer system for you, thus getting rid of the viruses or two it will ask if you want to continue using your computer without protection. Most of us will of course take the software up on its kind offer to remove the viruses. DO NOT pay for it!

So, not only are we now making payment and handing over our hard earned cash for something unnecessary that doesn’t actually exist, but we’re leaving ourselves wide open to identity theft, fraud and bank account hacking too. And it’s not just about the money and the ID, the fake antivirus application is often also able to log your key strokes, steal documents from your files, and actually do the one thing that it is claiming to assist with: it will infect your other files, your networks and even install more malicious malware. Very often this rogue AV program comes in the same package with trojan droppers and rootkits, for instance Sirefef.

So let’s just sum that up: you are paying for the privilege of letting supposed antivirus software install actual viruses onto your computer or laptop!

So how does System Care Antivirus find its way on to your PC? Well there are in fact a few different methods that the creators of rogue antiviruses use – all of them designed to catch you off guard and leave you none the wiser that you’re a victim. Firstly, it can come through your inbox. You see that attachment to an email or that link embedded into correspondence? Stop before you open it or click on it as it may be malicious. If you don’t know the sender it’s wise to ignore the mail, although having said that anyone can fall victim to viruses so there’s no guarantee that a friend isn’t unknowingly sending you an infected attachment.

Furthermore, this scareware may also be found and accidently downloaded via a social media site such as Twitter or Facebook, with a link taking you to a website that will automatically download the rogue AV on to your computer. The software can also be downloaded by malware (short for malicious or malevolent software) that is already present on the PC’s system. Although very unlikely, but this application may be downloaded from its official website hxxp://systemcare-antivirus.org. Once the software is on your system, pop up boxes will start appearing asking you if you want to scan and clean your computer.

Warning: Your computer is infected
Detected spyware infection! Click this message to install the last update of security software... 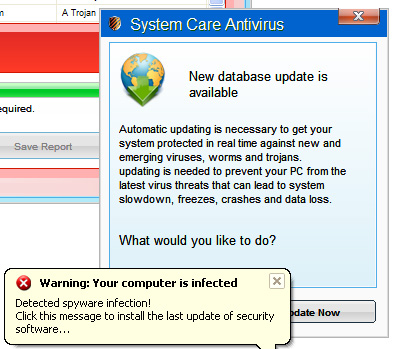 Spyware.IEMonster activity detected. This is spyware that attempts to steal passwords from Internet Explorer, Mozilla Firefox, Outlook and other programs.
Click here to remove it immediately with System Care Antivirus.

These days thanks to identity theft becoming an increasing problem, fake AV’s can present a very real risk, so take steps to protect yourself, make sure you have antivirus software installed and that you know who your provider is.

If you need help with remove this malware, please post your comment or question below. Good luck and be safe online!

Enter the System Care Antivirus activation key given below and click "Activate" to activate the rogue antivirus program. Don't worry, this is completely legal since it's not genuine software. 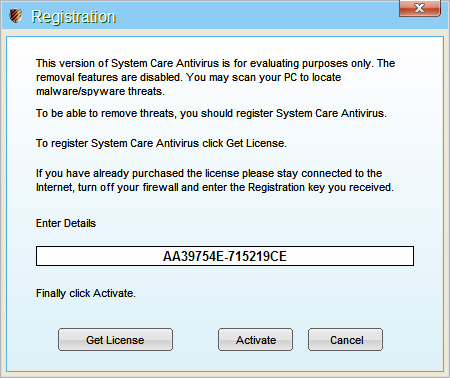 Once this is done, you are free to install recommended anti-malware software and remove System Care Antivirus from your computer.

1. First of all, go to your Desktop and right click the System Care Antivirus.lnk shortcut file and select Properties. 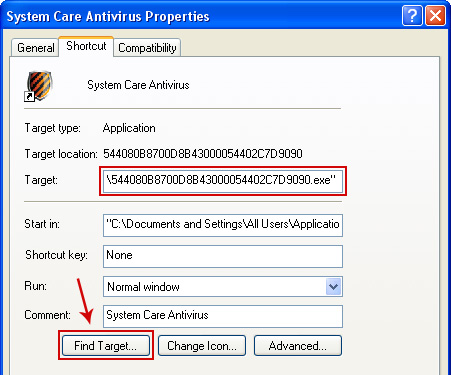 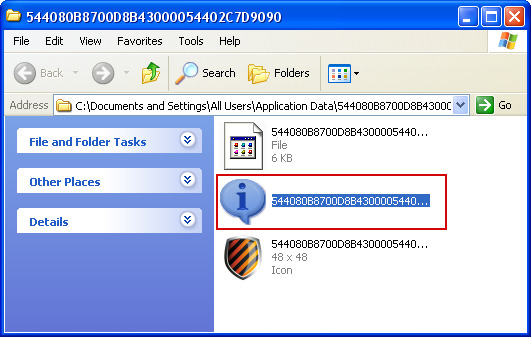