What is wrtc.exe and how to remove it? 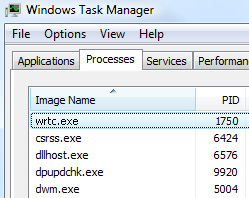 wrtc.exe is a part of IncrediMail software, digitally signed by Perion Network Ltd. This application is detected as andware or potentally unwanted program by most antivirus products. It's not essential for Windows and may cause problems. For example, there might be multiple copies of wrtc.exe, even up to 20, each using up to 5% or more of processing capacity. Sometimes, you may see 100% cpu load because of this application. Needles to say, your computer will slow down at a noticeable rate. Furthermore, it may display pop-ups and ads while surfing the web. Some of them may be very annoying and intrusive or even inappropriate for kinds or not safe for work. wrtc.exe will also create a firewall exception which allows programs to access to the Internet through an outbound connections. In other words, this application may download and install additional adware or even spyware on your computer without your knowledge and permission. I recommend you to remove wrtc.exe from your computer.