What is WajamUpdater.exe and how to remove it? 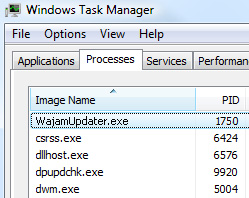 WajamUpdater.exe is an auto-updater for Wajam social search engine. The process runs automatically every time Windows starts and checks for available software updates. At least 8 antivirus engines have detected malware in Wajam Browser Helper Object and WajamUpdater.exe. Usually, these files are detected as adware or PUP (PUP.Wajam, Win32/Wajam.A), some antivirus engines flag it as a Trojan but personally I think such classification is too strict. In my opinion Adware or PUP is enough. Very often Wajam comes bundled with other applications, Delta Toolbar, Search Protect by conduit to name a few. If you found WajamUpdater.exe running on your computer then there's a good chance that you've installed other adware or potentially unwanted programs on your computer. Most users decide to remove this software because it's either not useful and makes their computer run slower, display ads or causes other issues. It goes without saying, that this application is not essential for Windows and may cause problems. I recommend you to remove WajamUpdater.exe and from your computer and run a full system scan with recommend anti-malware software.