What is WebCakeDesktop.Updater.exe and how to remove it? 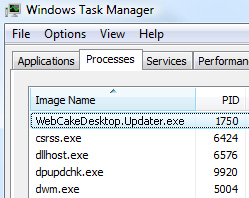 WebCakeDesktop.Updater.exe is a part of WebCake adware. This particular file runs automatically every time Windows starts. It stays active in the background and checks for software updates. Sometimes, you may find two or more WebCakeDesktop.Updater.exe running in Task Manager. Even though, most antivirus products do not block this application, quite a few detect it as adware or PUP. Once installed, this adware may display advertisements and popups on your computer. It may collect information about your system and browsing habits. Later such information us typically used to display the most relevant advertisements on your PC. Very often, when users find this process running they also detect other adware or even malware on their computers. So, if you have it too, then there's a good chance that your computer is infected with malware as well. It goes without saying, that this applications not essential for Windows and may cause problems. I recommend you to remove WebCakeDesktop.Updater.exe and from your computer and run a full system scan with recommend anti-malware software.