We've seen a significant increase in the number of misleading sub domains in .co.cc TLD that were promoting malware called Fast Windows Antivirus 2011. We usually classify such misleading websites as browser hijackers that pretend to scan your computer for malicious software and reports hundreds of false system security threats. They distribute malware and at least for the last few weeks they were hosting fake anti-virus application called Ms Removal Tool (BestAntivirus2011.exe). If you somehow ended up with this rogue anti-virus, please follow the Ms Removal Tool removal instructions. Although, these browser hijackers or fake scanners are titled "Fast Windows Antivirus 2011", we haven't found any rogue security program with such name yet. Most likely, Fast Windows Antivirus 2011 is only used for marketing of other malware. Anyway, if a window titled Fast Windows Antivirus 2011 pop-ups on your computer screen and supposedly scans your computer then it's certainly a scam. Do not download anything from such misleading scanners as shown in the image below. If you think that your computer has been infected some sort of malware, please run a full system scan with anti-malware software. Good luck and be safe online!

Here's an example of a fake anti-malware scanner tha reports non-existent infections on your computer. 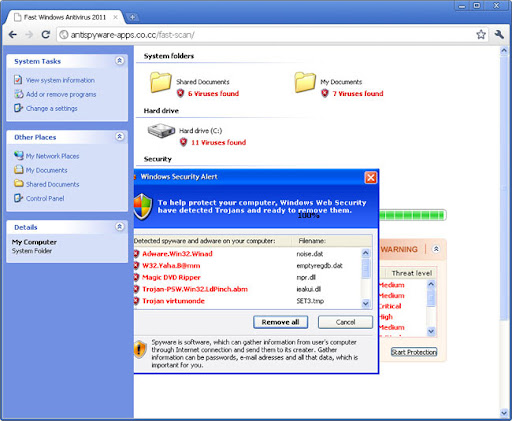