Windows Antivirus 2012 has found critical process activity on your PC and will perform fast scan of system files! -- if a dialog box comes up with something similar, please do not click on anything and leave the web page immediately. It's a part of blackhat SEO attack that leads users to fake virus scanners. Social engineering and black hat SEO attacks are still very popular even though the volume of successfully executed attacks has decreased significantly during the last six months. Reputable security products use URL filtering and generic detections for certain components of well thought search engine optimization attacks, but it seems that cyber crooks have found other ways to game the search engines (anti-spam teams). Fake online virus scanners are back and kickin'. 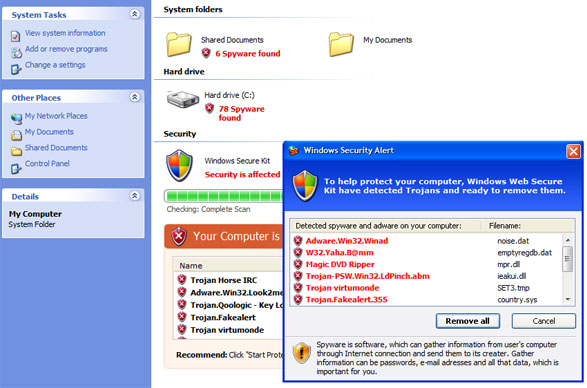 Rogue anti-virus programs from the FakeVimes family are being installed at the time of writing. It's one of the most widely spread scareware for a couple of months now. The problem with fake virus scanners is that only few AV programs will actually catch them. Very often such attacks defeat even the most determined users, who will allow rogueware to be installed on their machines no matter how much you teach them. Besides, cyber crooks are constantly looking for improvements that will increase conversion rates. A security message from Windows Antivirus 2012 seems quite legit and confusing at the same time, isn't it? People might think is a genuine Windows warning. Also, most of us tend to trust search engines results. When we get a security warning from a web page that is listed on the first page of results, we think that something is definitely not right because Google or any other popular search engine wouldn't allow misleading websites to show up in the search results in the first place. Unfortunately, this is not always the case.

Fake Windows Antivirus 2012 scanner claims that your computer is infected with malicious software. It randomly displays infections supposedly found during the scan, which is by the super fast :) The truth be told, it doesn't scan your PC for malware. It's just a simple javascript file that displays nice graphics and scan animation to scare you. Don't download or install anything from such websites. Close the fake scanner immediately and run a full system scan with up to date antivirus software to be sure that your computer is clean. If you have any questions, please leave a comment below. Good luck and be safe online!

Tell your friends:
Posted by Unknown at 10:35