What is wscript.exe and how to remove it? 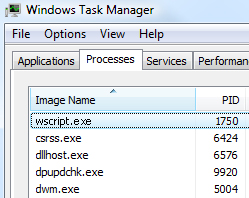 wscript.exe is a Windows service that allows you to execute VBScript files. Normally, it is not dangerous, but if a malicious script is downloaded and executed it will appear as if wscript.exe is the culprit, when it is really a separate .vbs file. Antivirus programs usually detect C:\Windows\System32\wscript.exe as the culprit, however, it's not necessarily infected. It may be that your computer is infected with Worms and Trojans that attempt to execute malicious .vbs scripts. Most users, get these malware infections from SD cards, pen drives and of course infected websites. Malicious files may change Windows registry, establish connection to remove servers controlled by cyber crooks and download additional malware modules. Other issues: can't open Regedit, certain Windows options are missing, can't acces Contol Panel. Malware may also block anti-malware and Windows system utilities. You should not delete wscript.exe manually, many Windows services require it and our computer may not function properly if it cannot be found. But you should use recommend anti-malware software to remove wscript.exe related malware from your computer.