Antivirus Protection 2012 is rogue (low quality) anti-virus program which claims that your computer has been infected by Trojan horses, keyloggers, rootkits and other sophisticated malware without any specific evidence. The moment Antivirus Protection is installed on your computer, it will begin to scan your system for malicious software. Malware scan takes just few seconds, whereas a legit antivirus program may take a few hours to complete the scan. Once the scan is finished, the rogue anti-virus program will report finding dozens of infections on your computer to scare you into compliance. Furthermore, it will display fake security alerts. These alerts (see images below) often look very realistic. Masked as anti-virus program, Antivirus Protection 2012 will claim that you need to pay money to register the software in order to remove found threats. It's very important to research any software before purchasing it. Especially, if it suddenly pops up on your computer and tells you that you are infected. 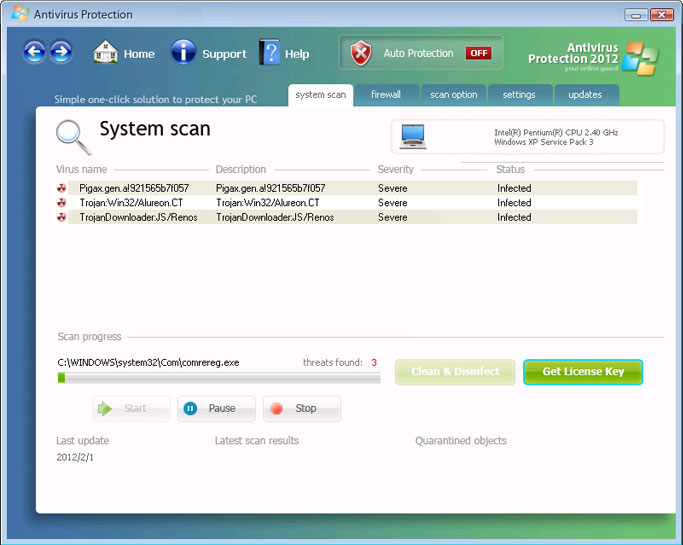 It's not a new family of malicious software. Early versions first surfaced three years ago under various names such as Security Monitor 2012, AntiVirus System 2011, etc. The graphical user interface hasn't changed much since then. High conversation rates is perhaps the most likely reason why they've used the same GUI over the years. We have to admit that Antivirus Protection 2012 and fake security alerts often mimic and look very much like the actual Windows Security Center and Windows system warnings. Thus they may look quite legitimate to unsuspecting users.

How does rogue security software get on my computer? Simply visiting a website is enough for an attacker to infect your computer with Antivirus Protection 2012 malware. This is known as a "drive-by download". Malware authors use commercial crimeware kits, BalckHole is probably the most popular, to exploit software vulnerabilities and install malicious code. So, basically, you don't even need to click or download anything. Malware is getting more serious, not less. Cyber crooks get better at repacking and avoiding detection by anti-virus software. You MUST update Windows and the software installed on your computer. This is very true for Adobe, Java and some other software. A significant percentage of successful malware attacks comes through social engineering techniques as well. Needless to say, we shouldn't forget spam even thought the global spam volume dropped significantly since last summer.

Fake Security Center Alert claiming that your computer has been infected by Sft.dez.Wien virus. Never heard of it. Must be a new one ;) 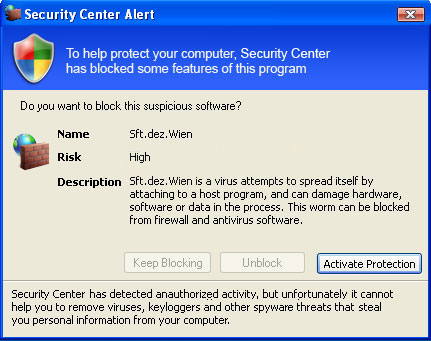 Another fake security alert claiming that your computer is sending out an enormous volume of spam.

System critical warning!
You have been infected by a proxy-relay trojan server with new and danger "SpamBots". 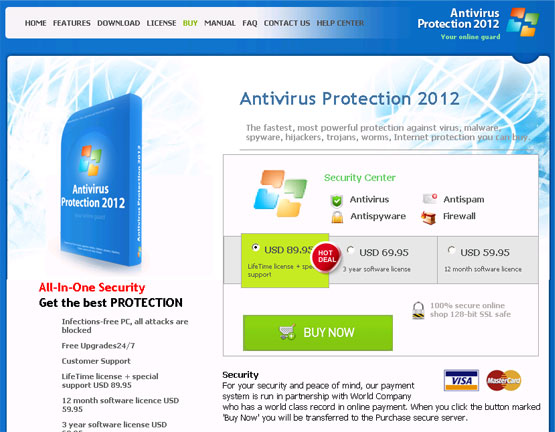 Let's proceed to the most important part of this article: Antivirus Protection 2012 removal. This rogue anti-virus has payloads worse than fake security alerts. It blocks certain Windows utilities and legit anti-malware software rendering your computer pretty much useless. You may not be able to run your favorite malware removal tool in Normal Mode. If so, please reboot your computer in Safe Mode with Networking. Fake AVs usually stay inactive while working in Safe Mode. To remove Antivirus Protection 2012 and associated malware from your computer, please follow the steps in the removal guide below. Users needing further assistance with this malware, please let us know. Simply leave a comment below. Good luck and be safe online!

1. Use this debugged serial key LIC-00A5-3F5G-BHA5-KJB8-579F-CVH9-M935-QW45-89M5-19AB to register the fake antivirus in order to stop the fake security alerts. Just click the Activate button and enter the reg key manually. Don't worry, this is completely legal. 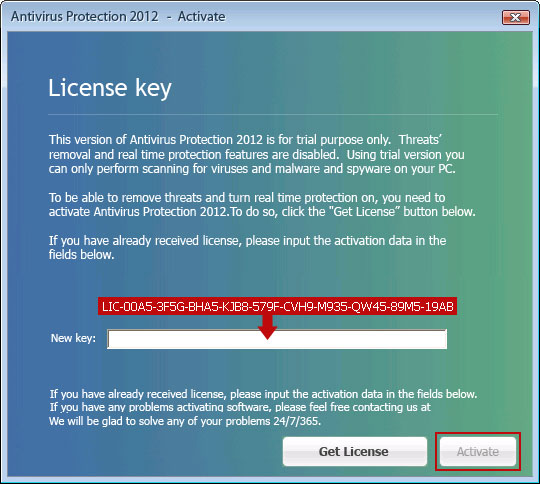 2. Download recommended anti-malware software (Spyware Doctor) and run a full system scan to remove this Antivirus Protection 2012 from your computer.

2. Launch Internet Explorer. In Internet Explorer go to: Tools → Internet Options → Connections tab. Click Lan Settings button and uncheck the checkbox labeled Use a proxy server for your LAN. Click OK. You may have to repeat steps 1-2 if you will have problems downloading malware removal programs. 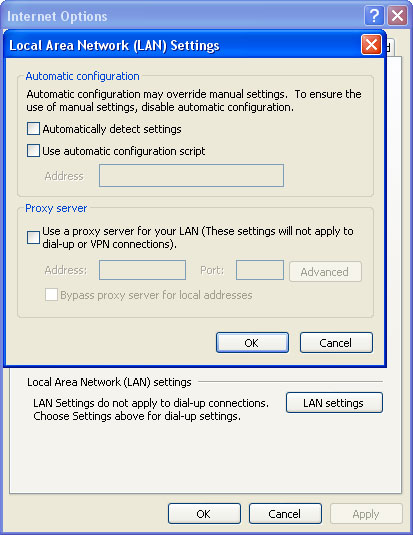 3. Download recommended anti-malware software (Spyware Doctor) and run a full system scan to remove this Antivirus Protection 2012 from your computer.

Tell your friends:
Posted by Unknown at 12:05