Security Tool Firewall Alert is a fake pop-up from the rogue antivirus program called SecurityTool. It's a typical scareware so there is nothing strange that once installed it will do everything to make you think that your computer is infected by malicious software or under attack by an Internet virus. "Security Tool Firewall Alert" is just a small piece of whole scam. If you see this fake warning as shown in the image below then there is not doubt - your computer is definitely infected with rogue software.

The fake warning below claims that Security Tool has blocked Mozilla Firefox from accessing the Internet. That's strange and funny at the same time. Apparently, the rogue program chooses programs to be displayed randomly. Unfortunately, you can't just simply remove the fake warning without removing the rogue program in the first place. Please follow Security Tool removal instructions and remove this infection from your PC as soon as possible. 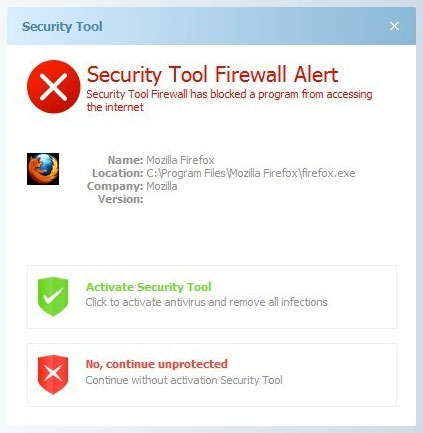