Av-2010.com is another misleading domain that should be added to a list of potentially harmful sites because it promotes widely spread rogue anti-virus program called Antivirus Soft. By the way, if you computer is already infected with Antivirus Soft scareware then you will probably see Av-2010.microsoft.com instead of Av-2010.com. That's an old trick, but don't be fooled. Antivirus Soft malware has nothing to do with Microsoft Corp. Malware just changed HOSTS file and adds this fake domain Av-2010.microsoft.com.

Please avoid Av-2010.com scam. If your PC got infected then use legitimate anti-malware program to remove Antivirus Soft, Av-2010.com and other malware from your computer as soon as possible. Otherwise, the rogue program may download and install additional malware onto your computer. And that's of course won't make your situation better. Please follow this Antivirus Soft removal guide. Good luck and be safe! 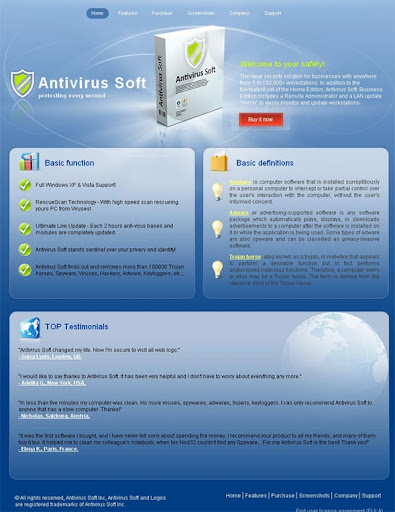 Share this information with other people:
Posted by Unknown at 08:27