What is SoftwareUpdater.Ui.exe and how to remove it? 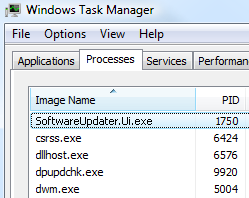 SoftwareUpdater.Ui.exe starts every time you open your web browser but this process isn't essential for Windows because it's not a system file. It's a software updater installed by Vittalia, DealPly, Auto Lyrics and other malware. The main update process including Windows Service named SrvUpdater (UpdaterService.exe) has been classified as malware and potentially unwanted software. Comodo Internet Security classifies it as Heur.Corrupt.PE. Trend Micro detects this file as TROJ_GEN.F47V0531. Other anti-virus applications detected possible adware and spyware in SoftwareUpdater.Ui.exe as well. This application is usually installed without direct consent of the user. What is more, it adds a background controller service that is set to automatically run, this is done to avoid any UAC prompts. It means that you probably won't even notice that this process is running in the background and using up your RAM, about 17.58 MB on average. Might be even more when the process downloads and install additional software onto your computer. I recommend you to remove SoftwareUpdater.Ui.exe from your computer. You should scan your computer with recommended anti-malware software as well.